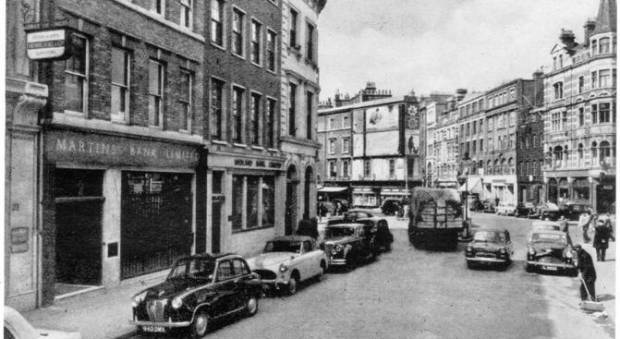 It was a cold winter day in 1956 London and the snow was piling up.

A woman had just returned from the store with some milk and bread and was hanging up her winter coat. She quietly put the groceries away in the refrigerator and then started a fire in the fireplace. She sat in her favorite chair warming her hands and stared out the window at the lazy snowflakes kissing the ground.

The light was just beginning to fade behind the buildings and the bustle of activity slowed until there wasn’t a soul in sight. Windows shut, lights went out and the city began to sleep. But not her.

She pulled her notebook from under the bed and wrote about the day. About the man in the burgundy sweater and the child who lost her balloon. About the mean bakery chef yelling at the selling lady for accidentally dropping a freshly baked blueberry pie. About the train whistles off in the distance bringing new faces to the city of London and taking away those who wished to be elsewhere. There had been a demonstration earlier that month in Trafalgar Square by a man named Aneurin Bevan. She made a comment in her notebook about how people still hadn’t taken down all the banners that read, “Law, Not War”. But whatever conflict that Egypt had found themselves in did not concern her.

She was a simply woman who made her money by working a new office job…a brand new trend that had only began about a decade ago. Women made up more of the office job force than men which was a brand new thing.

Every day she would go to work and every night she would come home and write in her notebook, sipping tea, staring at the fire and watching the activity of the day slow and stop with the absence of the sun and presence of the moon. This woman was in her late twenties.

She lived alone and had no family of whom she saw within London, no boyfriend and no pets. She loved the night time where she could be alone with her thoughts in her small ground floor home where she could watch the world. She usually dressed in dark clothing during the winter, it helped to keep her warm and made her feel invisible.

And she had the most beautiful black hair, so dark that you could believe there were galaxies hidden within her locks.

And as she sat in her chair, the notebook now put away, holding her cup of tea and watched the flames. She realized how truly happy she was in her calm existence. She was simply the watcher of the evening time, and that was alright with her.

A free spirit and a wild soul. I am a writer who is seeking the inspiration found in the crannies and nooks of life. My goal is to combine the world in my head with the world around me one page at a time.

3 thoughts on “She was the watcher of the evening time.”